It seems as though during the 1970’s & 1980’s that the CBS network was king of the made-for-television horror movie arena. Today we have one of their classics from 1972, “Gargoyles”.

A paleontologist and his daughter are traveling through the Southwest and encounter a cave of gargoyles. Pretty straight forward plot with a slight twist at the end. A couple of what ended up to be some semi-famous actors can be found, Scott Glenn (“Silence of the Lambs”) and Bernie Casey (of “Revenge of the Nerds” fame).

This week MattyV, Dan the Man, & Jay hit the Grand Rapids Comicon for the first time. It was some serious sensory overload for all three of them, booth upon booth of comics/collectibles/clothing as well as a multitude of people.

Dr. Strange Prelude #1 is available from Comixology for free. Great for those awaiting the Dr. Strange movie coming up in November.

Dirk Gently’s Holistic Detective Agency, an adaptation of the Douglas Adams book, debuted on BBC America this weekend. Pretty quirky show, if you loved “A Hitchhiker’s Guide to the Galaxy”, you might like this show…

Martin Freeman did start his rise to fame as the “Jim” character (“Tim”) in the UK version of “The Office”. If you notice, the first episode of the US version is an almost shot-for-shot/line-for-line remake of the UK version…

“Guardians of the Galaxy Vol. 2” dropped a new trailer & movie poster for people to ogle & cream-their-jeans over. And it has been confirmed via the trailer that Peter Quill will meet his father, Ego the Living Planet (MattyV goofed and called him Argos)…

The Nintendo Switch is new hybrid controller/tablet/console that may or may not change the face of casual gaming. MattyV & Dan the Man cannot wait for the NES Classic, a 30-in-1 game console for $60 that is officially licensed by Nintendo. With classics inside such as Super Mario, Kirby, & Tecmobowl!

Among the vendors were some luminaries (and not so luminary) of the comic/sci-fi/fantasy world. Denise Crosby made an appearance:

As you can see, she wasn’t as busy as hoped for. I think what did it was the cost of signatures & photos ($40 for a signature, $40 for a “selfie”), as it was with Sean Maher (of “Firefly” fame). He had the same asking price. There was the woman who voiced Slimer in “Ghostbusters II”, Steve Blum (voice actor best known as the voice of StarScream in “The Transformers” animated series as well as Wolverine in the animated series), Russell Hodgkinson (plays Doc in the Sci-Fi series, “Z Nation”), and other voice actors from memorable or not-so-memorable cartoons.

Yet the biggest draw (pun intended) was that of Kevin Eastman, co-creator of “The Teenage Mutant Ninja Turtles”. His signing line was longer than any and people waited up to 2 hours for an autograph (first one’s free, subsequent signatures were $20 each). Many had brought along toys, newer comics, hardcover collections, but our own MattyV dug a few gems out of the vault:

Comic shop fresh, this was the first Turtles comic MattyV bought back in 1987. Read once and immediately placed in plastic where it sat for the last 18 years. Little-known fact, when the Turtles first came on the scene they were beer-drinking, cigar smoking, women chasing rascals…

But that wasn’t all, MattyV has a penchant to collect “knock-offs” of the Turtles craze as well. Back in the early days of the Turtles, many independent comic studios were quick to rush out their own versions of the characters as everything from hamsters to walruses. MattyV thought it might be funny to have Kevin sign one the knock-offs as well:

Another comic luminary made an appearance, one that might be of interest for Gen-Xers like MattyV & Dan the Man. Bob Camp is a name that some might remember as the creator of the popular “Ren & Stimpy” cartoons that debuted on both Nickelodeon & MTV in the early 1990’s. What most don’t know is that Bob Camp actually got his start illustrating covers & penciling/inking for both Marvel & DC. MattyV had met Bob a few years before at the Asbury Park Comicon, where he had him sign the first issue of “The ‘Nam” that he did a cover for. This time around, he thought it appropriate to have Mr.Camp sign the last issue that he did a cover/penciled & inked for “The ‘Nam”: 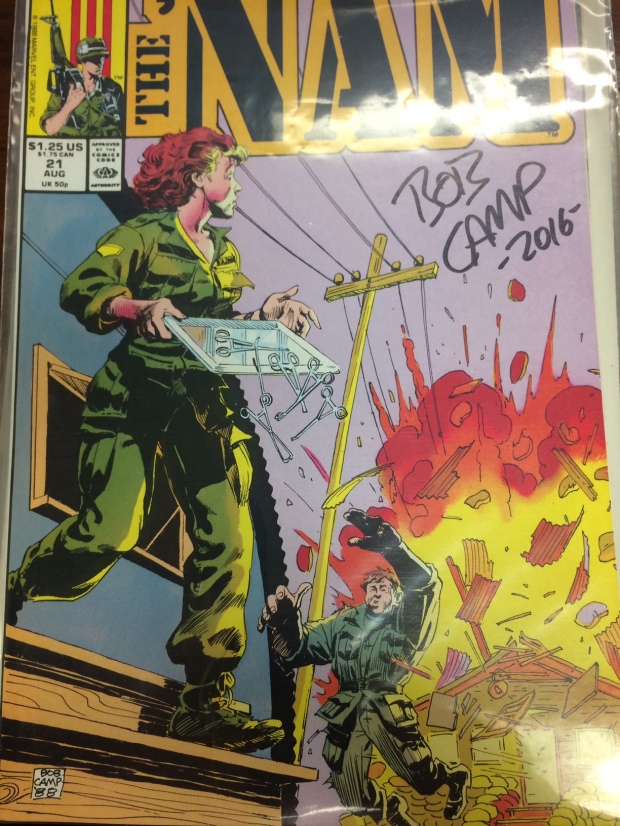 Bob is a real down-to-earth guy with reasonable signature rates ($10). For the cash MattyV got a signature and a story about Bob & comic artist Michael Golden. Really nice guy…

Of course there was cosplay too, from tons of Deadpool characters (including a Deadpool Trump!), Dr. Who characters, Minions, & we couldn’t count how many Suicide Squad Harley Quinns there were of all shapes/sizes (some of which made Dan the Man & MattyV feel a bit pervy from their ogling). A couple of Negans also graced the floor with their leather jackets & barb-wired “Lucille”s. Here’s a few that Dan the Man was able to take photos of: 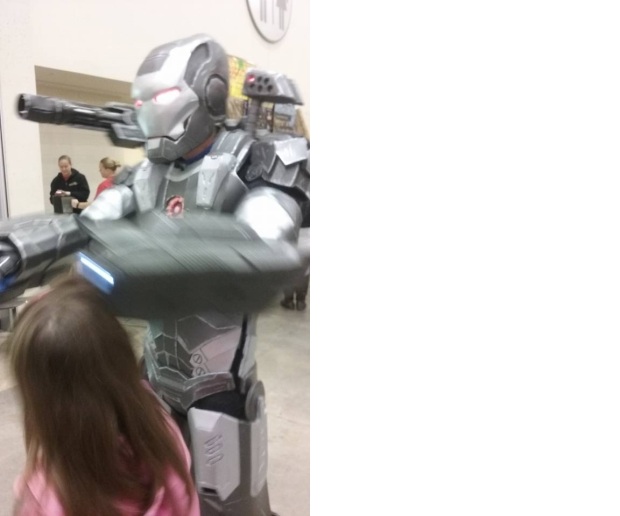 One of a plethora of Spideys…

There were some gender-swapped couples, this one was Slave Han & Leia Solo.

Easily our favorite, Ash from the “Evil Dead” series complete with Book of the Dead & chainsaw hand!

The guys came away with a few items for their “man caves”, well MattyV doesn’t have a cave but rather a cabinet of curiosities in his office. This little bit of nostalgia came home to roost among his Goonies ReAction figures: 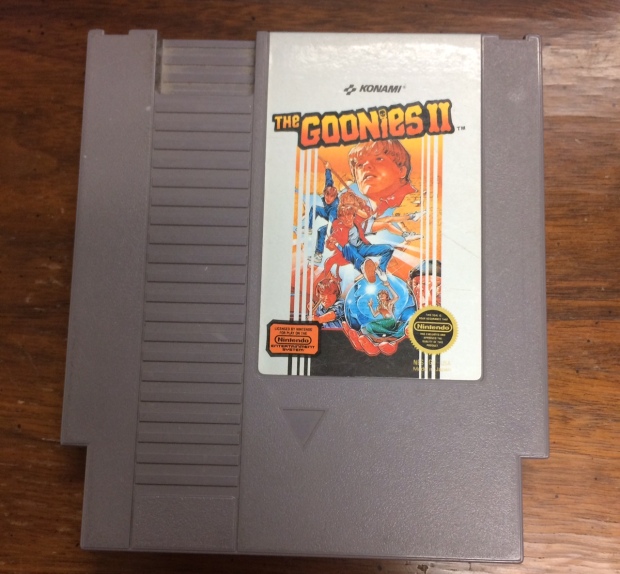 One of the shittiest sequels ever to be put out for the NES(maybe the shittiest game ever), this unfortunately isn’t the “5 screw variant” that is fetching big bucks on eBay but is still a clean copy nonetheless. The Goonies must save Anna the Mermaid from the dreaded Fratelli family. Yes, that is the plot. I swear. MattyV found a YouTube video where someone actually played the entire game from start to finish (it’s an hour long, so be ready).

From the case files of Ed & Lorraine Warren, this made-for-television movie from Fox tells the tale of the Smurl family and the forces that awaited them as they moved into their new home. Plagued with supernatural forces, the family reached out to the Warrens in order to help them rid their home of the unwanted spirits.

You might remember some of the Warrens’ other case files that became movies, “The Conjuring“, “The Conjuring 2“, “Annabelle“, & “A Haunting in Connecticut“…

Someone posted this online in all its VHS glory…

A lesson in life, a student who got perfect attendance for 5 years in a row ended up with a pen instead of an iPad. But there’s more to the story…

When you hear the phrase, “bag it”, that doesn’t literally mean you put a plastic bag on your wiener…

Some pretty great cake decorating fails. I like the Yoda with a penis…

Suing your school for bad grades, suing a restaurant chain for making you fat, now apparently you can sue your parents for posting photos of you on Facebook…

What’s in a $43 martini? Vodka made with water harvested from authentic San Fransisco fog…

Has Nerdist stumbled on the upcoming explanation for the BIGGEST plot hole in the Star Wars franchise???

How do the rich enjoy their ganja? Why in the most expensive way possible, of course!

All I get for paying taxes is a swift kick in the finances. In Japan, you can get an authentic hand-crafted sword…

The psychology of why clowns creep us the f*ck out…

Forget the Nike self-lacing shoes, you want the new Converse Wah-Wahs with a built-in wah-wah pedal for guitarists…

Susan Lucci was at the top of her game back in the early 1980’s, star of “All My Children” and many made-for-television movies. This Wes Craven (!) directed movie finds a young family moving to an upscale suburban town where anyone who is anyone belongs to the most-exclusive country club. What the family finds out, however, is that there is more going on there than just tennis & hot tubs…

Starring many other television stars of the day (Robert Urich, Soleil Moon Frye, Joanna Cassidy), another capsule of the 1980’s found in this 90 minute gem.

A family moves into a new home in order to escape the memories and heal from the death of their oldest daughter. What they never bargained for is that the daughter’s spirit followed them and wishes to punish those that allowed her to perish! Starring Valerie Harper & Ruth Gordon(!), this is one of the more depressing horror movies this month…

Sorry for the Taze

Sorry for the Taze

A Florida ex-sheriff is involved in a civil suit where he sent a picture of a cake he baked to the victim with the words, “Sorry I Tased You” along with a crude drawing of him tasing the victim. The officer was off-duty at the time and was “horsing around” with the victim, according to his defense.

How can a bicycle company decrease its shipping damage by 80%? By putting a picture of a flat screen television on the outside of the box…

The states has a “safe haven” law that allows for parents to give up newborns at fire & police stations without repercussions. Russia is contemplating eliminating their “Baby Boxes”, where mothers can leave infants anonymously. Opponents claim that eliminating the 20 boxes will mean more dead babies left in the woods or trash dumps.

I get not allowing those license plate covers or ground effects lights, but to give a ticket because a dealership’s license plate frame obscures the state’s web address?

Of interest to Dan the Man, the Redskins case is going before the Supreme Court to determine if the name is free speech or falls under the 1946 Lanham Trademark Act, which says that trademarks cannot be granted to names that could be disparaging to persons.

More people these days are ditching expensive apartments & homes to live out their dreams in vans & re-purposed school buses.

Nope, nope, nope. Guys are paying upwards of $35oo to have Botox injected into their scrotum to make them less wrinkled and appear larger. Do women love a man with a less-wrinkly ball sack?

Back in 2011 we learned that thieves can copy your keys from just a cellphone pic. In 2015, some poor sap lost money posting a photo of their winning horse race ticket with the barcode showing. Now apparently people are getting information from photos of airline tickets posted to social media. When are we going to learn???

A made-for-television classic starring the likes of Charles Durning, Lane Smith, & Larry Drake. Bubba is a mentally-handicapped man with the mind of a child. He spends his time doing what children do, playing games & pretend. But the townsfolk don’t take to kindly of Bubba playing with the local children, especially a little girl.

When the little girl is injured, Bubba is fingered as the culprit and a whole posse is sent out to find him. What happens to Bubba & those that wronged him make this movie one of those “gotta watch it every year” kind of movies.