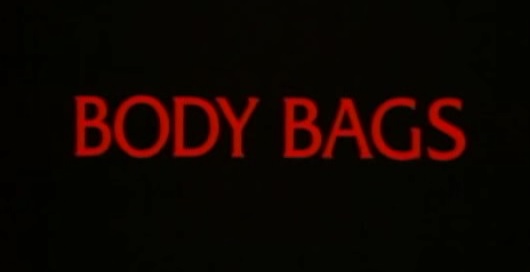 Showtime decided to try and capture some of that market with “Body Bags“, bringing horror masters John Carpenter & Tobe Hooper on board. Three episodes were developed and shot before Showtime decided that this was no longer a direction they wanted to go. Instead, they released the unconnected episodes together into a movie with John Carpenter & Tobe Hooper “Book-ending” the episodes as a pair of deranged morgue attendants. It was only years later that they dove back into the genre with their “Masters of Horror” series that showcased many interesting tales as told by some of the greatest minds in the horror world.

The three tales are:

“The Gas Station” – a young college student starts her night shift job at a gas station in Haddonfield, IL (!) and learned about a serial killer that had escaped from the local mental institution.

“The Hair” – A middle-aged businessman worried about his thinning hair gets a hair transplant with interesting results.

“The Eye” – A baseball player loses an eye in a car accident, an operation to replace it with a donor eye has some unwanted results.

It’s sad that this wasn’t developed into a series, the episodes in this anthology were spot on. At least someone posted it for all to enjoy what could have been…

We start off with Dan telling his story hinted about last week. Then we creep into pervert teacher stories, Reddit has a thread on other’s stories…

Milking it to the max, here’s the video of the lady hit in the head by a newspaper…

How to play “Paper Football“… Or maybe a “Chinese Star”?

It’s horrible for sure and we don’t doubt that something happened to this woman. There are too many variables and inconsistencies over the past 30+ years that has clouded the whole ordeal. We wonder though, because of this ordeal, how many innocent people (men and women) will be hurt by false accusations. Our conversation at the end of the podcast was an honest one raising questions and hashing things out using the info we had at the time. We even prove “false memories” when discussing our recollections of the senior high graduation party both of us attended.

Dan reference the 1997 movie, “The Devil’s Advocate” with Keanu Reeves & Al Pacino. Something to check out…

The 1980’s were rife with “satanic cult” stories, the most-prolific was about a daycare that supposedly sacrificed children.

Yes, John Candy has his own cartoon show in the early 1990’s. Yes, it was about a kid’s summer camp. Yes, it surprisingly lasted 3 seasons and spawned a Marvel comic book series as well.

One of the campers, Iggy, watches a horror movie that causes his imagination to run amok in camp. Horror lurks around every turn for Iggy and the rest of the campers until John comes to the rescue.

Kev is a spokesperson for Weight Watchers, who has slimmed down as well. They are re-branding as “WW” and focusing on a health-centric focus that doesn’t just include losing weight.

Dunkin’ Donuts is also changing its name, dropping “Dunkin'” since they offer much more than donuts…

The new “Daredevil” season 3 trailer is interesting…. Too bad to hear “Iron Fist” was not renewed nor canceled & fans are petitioning for Netflix to renew it…

2 NFL teams are apparently looking at Colin Kapernick despite his convictions. Rob Gronkowski threatened to retire if traded to the Lions, he actually would retire if he could not remain with the Patriots...

Much like Randall, we as kids were ignorant of certain phrases and their meanings.

Stay tuned to the conclusion of the “lost pod”, where you will hear Dan the Man’s story and much more!

From some of the people who brought you “Dark Shadows”, “The Night Stalker”, & another anthology series, “Trilogy of Terror”, we have “Dead of Night”.

This is a late-1970’s made-for-television horror special containing 3 different stories, one of which starred a young Ed Begley, Jr.

“Second Chance” – a man rebuilds a car that travels back into time.

“No Such Thing as a Vampire” – A doctor tries to prove that his wife wasn’t bitten by a vampire.

“Bobby” – A woman distraught over the loss of her son does ANYTHING to bring him back. (This one was remade as a part of the “Trilogy of Terror” anthology)

Creepy but not too scary to enjoy. Someone posted a semi-decent copy online for all to enjoy…

Will Vinton passed away earlier last week. Some of his notable works would be his commercial work for Domino’s (“Avoid the Noid!”), the California raisin council (remember “The California Raisins” commercials?), and of course the Eddie Murphy claymation show “The PJs”.

His work can be seen in movies (“Return to Oz”), music videos (the “Speed Demon” music video for Michael Jackson), and television (“The PJs” & “The California Raisins Show”). He had turned into the 80’s & 90’s version of Rankin & Bass with a series of holiday specials from Easter to Christmas.

In this special, Wilshire Pig & Sheldon Snail find a map and uncover Dr. Frankenswine’s Monster. The claymation seems rather dated and unrefined compared to the magic of “CGI claymation” today, there is still some nostalgia and laughter to be had.